Originally a colonial settlement, the town Mount Ephraim came into popularity by a man named Ephraim Albertson, who owned the Public House, also called the Old Tavern, a popular meeting place at Black Horse Pike & Kings Highway from 1800 to 1825. Stagecoach companies operating between Camden, Philadelphia, and the coast chose Albertson’s tavern as a station. He supplied fresh horses for the stages, and maintained a large stable and carriage shed in addition to the inn. Mount Ephraim took its name from his name.
In 1855, Center Township was formed. It included Mt. Ephraim, Runnemede, Bellmawr, Brooklawn, Magnolia, Barrington and Lawnside. The first township meeting was held at the Public House.
Also that year, Mt. Ephraim got its first post office, the only post office in Center Township. Champion Goldy became its first postmaster.
In 1856, 3 mills, stables, a wheelwright, a blacksmith, a tavern, a store and farms operated in the community.
In 1862, residents built a community center. Community members used the two-story structure as a town hall and school.
In 1877, Charles C. Clark opened the community’s first general store. It also served as the post offices. He also ran the local feed mill next to the railroad station in Mt. Ephraim.

Near the turn of the 20th century, 24 trains stopped at the station each day. People walked or came by horse and buggy to the water pump on the station platform to drink the cool spring water or carry it home in large milk cans. 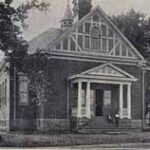 2. Mount Ephraim Borough Hall, 121 S. Black Horse Pike, is a building used originally as a school. The structure was constructed in 1903, converted into the borough hall in 1930, the same year the police department was formed. In 1975, an addition was built onto the borough hall.

“People should keep the history of an old town to hand it on.” Elisabeth Trace, teacher and borough librarian, in 1964

Elias and Eva Harwan opened the Mount Ephraim Theater at Black Horse Pike and Kings Highway on Thanksgiving 1930. It had 774 seats and a pipe organ. It hosted live performances as well as movie screenings. Abbott and Costello were among the stars who performed there. The theater was renamed the Harwan in 1970. In 1987, the building was sold to businessman Saverio Garafolo. The theater closed in 2000. Is now the site of Walgreens Pharmacy.